But the most significant difference was in the amenities. Coffee was just a few steps away in Mikhaila’s room on the Queen Elizabeth. To get coffee on the Carnival Vista, Monica had to leave her room or call room service. 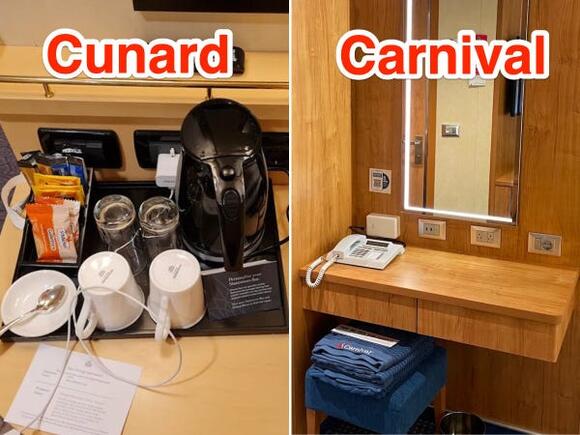 When Mikhaila arrived in her stateroom, she found a coffee station complete with coffee, tea, sugar, and creamer.

Monica’s room lacked a coffee machine, but you could order breakfast via room service each morning for your cup of joe or walk to the nearest eatery.

While both Mikhaila and Monica had robes waiting for them in their rooms, Mikhaila also had slippers. 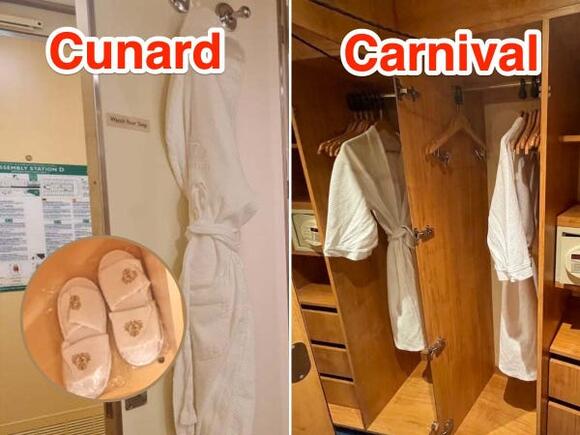 Cunard’s Queen Elizabeth had slippers and robes waiting for Mikhaila, while the Carnival Vista had robes in Monica’s room. Mikhaila Friel/Insider/Monica Humphries/Insider

Mikhaila found a robe hanging on the bathroom hook and a pair of slippers inside the closet when she arrived.

Monica found a robe but no slippers in her room. 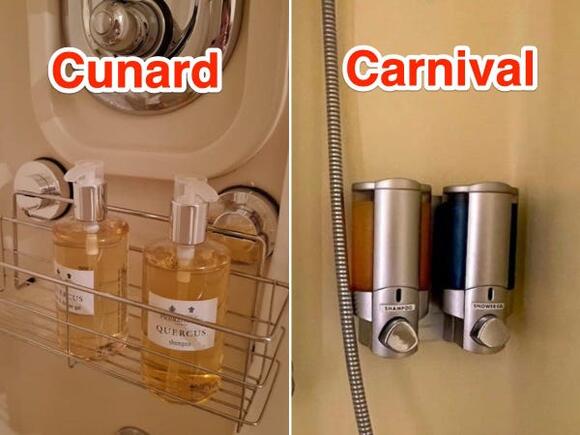 Throughout Mikhaila’s room, there were plenty of references to royalty — even inside the shower. The shampoo, body soap, and hand soap in Mikhaila’s bathroom were by royal-warrant holder Penhaligon’s.

A royal warrant is a distinction provided to companies that offer goods or services to the Queen, the late Duke of Edinburgh, or Prince Charles, according to the official Royal Warrant website.

Carnival did not prominently label the brand of products offered in Monica’s bathroom.

Each guest on Cunard’s ship received a bottle of wine. On the Carnival Vista, Monica’s minifridge was empty. 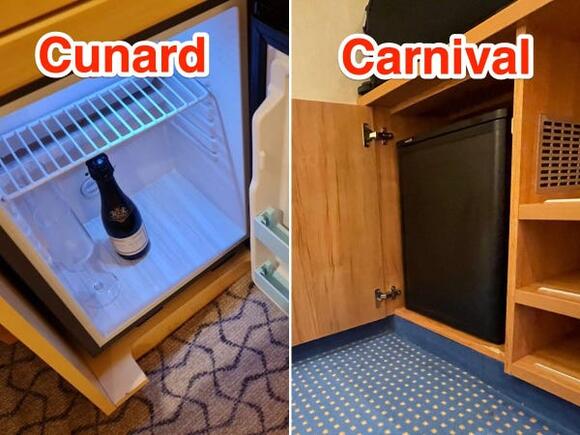 Mikhaila was greeted with a bottle of champagne in her minifridge when she boarded Cunard’s Queen Elizabeth. Monica’s fridge on the Carnival Vista was empty. Mikhaila Friel/Insider/Monica Humphries/Insider

Mikhaila was pleased to find a bottle of wine waiting for her in the minifridge, a complimentary gift given to all guests at the start of the voyage. It was accompanied by a note from the captain, welcoming all guests on board.

Her steward also left a chocolate on her pillow each night.

Meanwhile, Monica didn’t receive any chocolate or wine gifts during her stay.

There were other differences, too, like the process of ordering room service. On the Queen Elizabeth, a room-service order was placed over the ship’s phone. On the Carnival Vista, you ordered through a QR code on your personal phone. 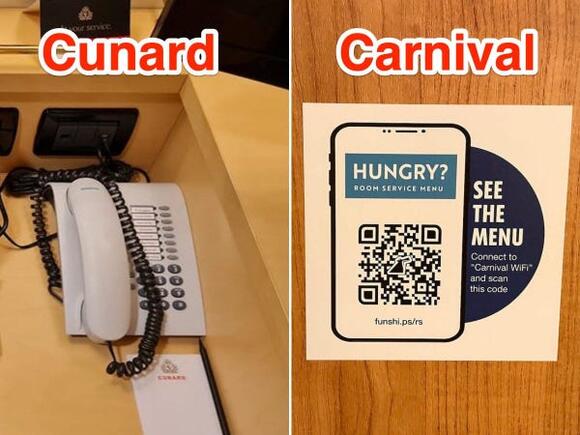 Cunard passengers could order room service through the room phone, while Carnival Cruise Line passengers ordered through a QR code and their own phones. Mikhaila Friel/Insider/Monica Humphries/Insider

As Insider previously reported, one of the most significant changes on Carnival Vista’s ship since the start of the pandemic has been the use of QR codes practically everywhere.

To order room service, Monica could access a digital menu and place orders through her cell phone.

On the Queen Elizabeth, Mikhaila had to order room service through the room’s phone.

While Mikhaila’s room was decked out in the Cunard logo, Monica could find only a few instances of Carnival’s logo in her room. 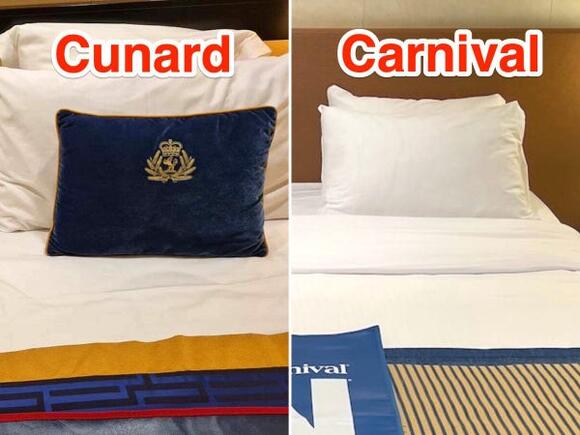 The pillows on the Queen Elizabeth had Cunard’s logo on them, while the Carnival Vista’s pillows were plain white. Mikhaila Friel/Insider/Monica Humphries/Insider

The Cunard logo, which features a lion rampant, a crown, and laurel leaves, was prominent in Mikhaila’s stateroom. It was on the throw pillows, the blanket, and the complimentary pair of slippers and robe. The logo was a constant reminder that Mikhaila was on a luxury cruise linked to royalty.

Meanwhile, Monica thought that the Carnival logo wasn’t as prominent throughout her room.

While there were plenty of differences between the two rooms, our reporters also noticed some similarities.

Each room had two single mattresses pushed together to create a king-size bed, two lamps, a TV, and a bathroom with a shower.

Mikhaila and Monica had their keys waiting for them outside their stateroom doors. 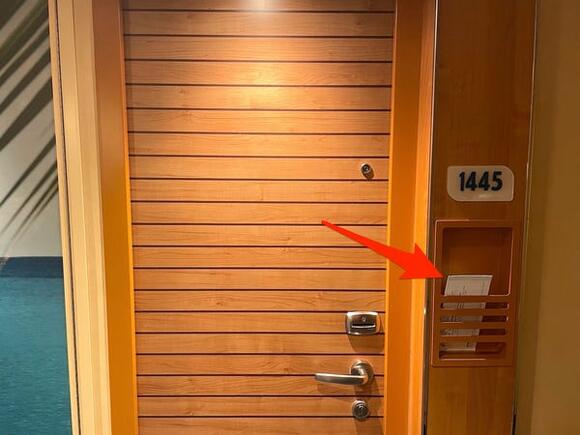 An arrow points to a nook where a key was waiting for Monica outside her room on the Carnival Vista. Monica Humphries/Insider

Both reporters were left to find their staterooms by themselves when they embarked on their respective journeys. They found their room keys outside their stateroom doors.

Mikhaila and Monica could also use their room keys as credit cards to purchase items on board their ships.